You are here: Home / My Favorite 9 Kid Fitness Posts / One Cool Dude with One Cool Dog…(and an Exercise Philosophy to Go with It) 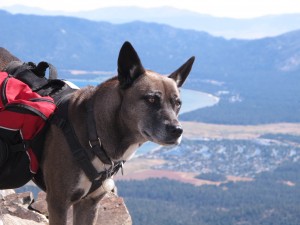 When I told my son (#4, Peter) the title for this post, he looked at me and said, “Mom…you’re not really going to say that.” I realize that the word “dude” has no business in this middle-aged mom’s vocabulary, but when you read about Eric Lane I think you will understand that it is a word that fits.  I’ll put up with the rolling eyes of my teenagers and say it anyway…Eric is one cool dude and he has one amazingly cool dog. 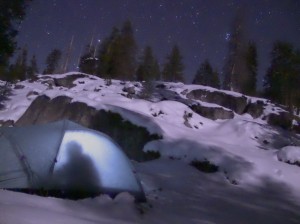 Eric in his tent under the stars which are actually illuminating the night sky.

He and his dog, Cadence, have climbed mountains together.  They have also broken a record. Cadence is the first dog trained to cross the Grand Canyon in recorded history.  The story is an amazing one. A once rescued dog became the rescuer, when, after nine days of hiking the Grand Canyon and finally reaching the north side…Eric found himself in 30 plus inches of snow.  One faulty step into the hard, packed snow sent Eric and the 90 pounds on his shoulders tumbling backwards and flat on the ground with a broken ankle, and extremely damaged leg.  Putting much of his pack onto the back of Cadence who was already carrying a pack of his own, the two set out to hike the 25 miles to the nearest patrol road.  Two grueling days later, a snow plower came by.  Unfortunately he couldn’t take Eric and his dog but promised that someone would return soon.  One day later, someone did.  Needless to say, Eric and Cadence have a connection between animal and human that few ever experience.

Although there is a lot more to the story about Eric and his dog, this isn’t actually an article about the two of them as much as it is about Eric’s strength and fitness program and its relevance to functional fitness.  I would like to introduce you further to Eric Lane, however it might take all day, so instead I have listed below just some of his accomplishments:  In his 25 years Eric has 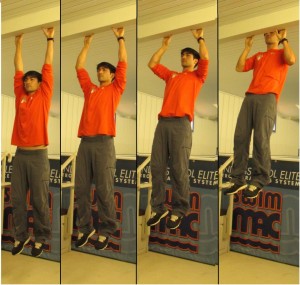 Eric trains people too (not in the same way he trains dogs).  In fact, he is one of a new breed of trainers who combines his interest in the outdoors, his love of sport, and his knowledge of science to create a workout that is totally unique and yet familiar.  Familiar because he uses aspects of cross-fit type intervals and equipment that many of us know (TRX, medicine balls, plyo boxes, and heavy ropes) and combines them with a smart and fast workout that is body-conscious and injury preventative.

This kind of workout clearly has an appeal.  Whether it is someone getting ready to climb mountains, preparing for a swim event or triathlon, or just trying to get or stay in shape, almost anyone can benefit from Eric’s style of workout.  Basically his training philosophy is about building strength from the center out.  Eric explains that with an integration of balance, coordination, and movement, the body becomes more efficient and general athleticism increases. Using terms like “muscle firing sequences” and “body connections”, Eric has developed a philosophy of fitness that permeates into all of his physical endeavors. “Great athletes need both efficient and powerful movements in their repertoire. Training for the long term career of an athlete instead of season to season increases the longevity of the individual as well as the health of the body.”  This is true, he says, for all types of fitness.

I met Eric at MAC (Mecklenburg Aquatic Club – now known as SwimMAC Carolina) where he works as a swim coach, dry-land coach, and is heading up SwimMAC Carolina Strength.  David Marsh, 2012 U.S. Olympic coach, seven-time National Team Coach, nine-time NCAA National Coach of the Year, 13-time SEC Coach of the Year, and head coach and CEO of Swim MAC Carolina (one of the largest and most successful club teams in the country), has certainly earned a reputation as an innovative coach.  It is no surprise that he would have another innovative coach like Eric heading up the new strength program. I recently participated in one of Eric’s (boot-camp style) circuit training classes and was sore for two days afterwards.  Eric believes in what he calls, “extreme body connection”, and has put together a  workout that takes the whole body into consideration.  “As someone who studied civil engineering; things like structure design, strength, and mechanics are no strangers to me. Whether it’s a bridge or a human body, principals of physics hold true in any system,” says Eric.

I would have to agree. I think our God-given bodies are an amazing study in structure design, and they are ultimately meant to be functional. It is truly fascinating to consider what the human body is capable of and the many ways we can use it to glorify God.  Combining his knowledge of engineering and his understanding of what it means to be physically fit, Eric seems to approach fitness like he does a mountain…always looking for a new challenge. 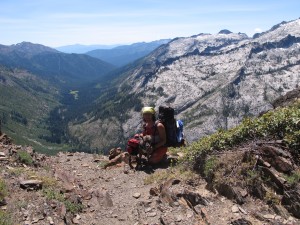 Eric hiking with his dog….

As a mother of nine who also loves a challenge, (but is unfortunately not presently seeking adventure pursuits), Eric’s philosophy is appealing to me.  I realize that fitness, while very important, is not my focus in life.  It has to compete with many other things that take precedence on any given day.  I have to be efficient about my exercise… and yet I still want it to be fun, challenging, and rewarding.  Functional fitness is about teaching all the muscles to work together rather than isolating them to work independently. This is true for Eric’s boot camp workout, which lasted 30 minutes (he also has an hour session) and I felt totally whipped at the end.

Although tiring, I enjoyed the workout and never had time to think about how I felt…each circuit was only a few minutes, including the “active recovery”.  We did TRX push ups, plyometric hops, and rope pulls, each one with an active recovery such as burpees, lunges, medicine ball drops, etc. in between.  As my own philosophy of exercise evolves, I see myself doing more of this type of workout as I get older so that I can continue to develop a strong core for the other things I love, like running.  Although I don’t see a mountain climb in my immediate future, I think Eric’s functional fitness is practical exercise for all kinds of athletes.

Have you tried a new kind of workout lately (with or without the cool dude to lead it)?  Tell us about it.  Even if you don’t live in the Charlotte area, check out Eric’s SwimMAC Carolina Strength page on Facebook (and Like it) or if you do live in Charlotte, try one of his classes listed on the webpage!