You are here: Home / Family Life / I Went For a Bike Ride…What is You Getting Out of Your Comfort Zone?

I Went For a Bike Ride…What is You Getting Out of Your Comfort Zone? 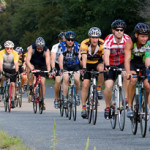 I went on a group ride on Saturday. I couldn’t believe how far outside my comfort zone it took me.  I used to ride a fair amount.  Clipping in and out of my pedals used to be no big deal.  But that was a long time ago. After many years away from the bike, I made my biking debut at the Giordana Velodrome last summer. Then I was off it again for almost a year.  I got back on twice this week.  On Thursday I joined #6 (Grace) on a practice ride back at the velodrome.  On Saturday I saddled up again for a 30 mile ride in Waxhaw, NC along with #7 (John) who is 11.

Oddly, my anxiety about cycling remains high.  I can’t blame it on my age since most of those riding in the group ride were at least my age and many were well over 10 years older than me.  I can’t really blame it on inexperience either, since I started cycling as a junior in college at Indiana University. 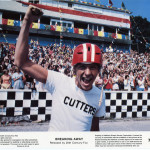 IU is home of the Little 500 (Breaking Away 1979).  1988 was the first Women’s “Little 5” as they fondly call the big race in Bloomington.  When a few friends in my sorority at IU said they were getting a team together for the first Women’s Little 5, I jumped on board. At the time I had a Schwinn 10-speed that would get stuck in a gear, so I would have to hold onto the shifter on the front of the handlebar as I rode. At least I had a bike.  Bloomington and the roads of Brown County provided beautiful scenery for training.  Our team and sometimes a few others would go for about 25 miles on the weekends, and then a few days a week we would meet with one of the guys on a men’s team who had agreed to “coach” us on the track (he had raced in the Little 5 for three years in a row). 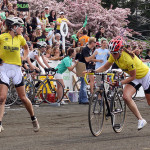 The bikes for the Little 500 are one speed (no gears).  The race is a relay, and the exchange between riders involves one rider hoping off while the other hops on (while the bike is in motion).  Obviously I was a lot less fearful when I was 19.

Maybe that’s just it.  I have a lot more to lose now. Whatever the cause of my cycling anxiety, I tried to put it aside on Saturday in order to ride alongside #7.  It was a massive group of cyclists and they offered 3 “levels”…A, B, and C.  A was the fastest, averaging 20-21 mph, and C was the slowest group, averaging 12-15 mph.  I happily fell in line with the C group.  My daughter Grace, (#6) went with the A group… leaving me with another reason to feel anxious. With me and #7 clipped in and ready to go, we set off, following a fairly large group of riders.

I think you could probably see the veins popping out of my arms given the tight grip I had on the handlebars.  I didn’t really settle in until after about 7-8 miles, after getting out of the main part of Waxhaw and pedaling out alongside farms and horse pastures.  I loosened up my death grip and started to relax, and finally looked around at the beautiful countryside.  Truth be told though, regardless of the gorgeous June day, I was never at ease.  We stopped a few times to allow everyone to catch up since we had spread out a little. The other riders were extremely kind, and for many it was their first group ride as well. It seemed like a long ride, and by the time I recognized road signs and knew we were getting close to Waxhaw again, I realized how tired I was.  Almost 2 hours of pedalling, even at a fairly easy pace, took a lot out of me. It was a sign of how out of my comfort zone I really was. 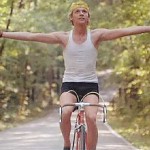 Yet, as we loaded our bikes back onto the van to head home, I had a good feeling inside.  I had a sense of fulfillment.  Of accomplishment.  Although still a little uncomfortable with the idea of regularly cycling again, at least I know I can if I want to.  It feels satisfying to do something outside of my norm.  What is you getting out of your comfort zone?