You are here: Home / Motivation / How I Found Myself Praying at the Velodrome

How I Found Myself Praying at the Velodrome 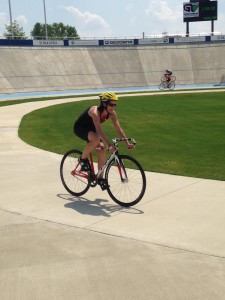 Me at the Rock Hill Velodrome

I haven’t been scared in a long time. I mean really scared. The kind of fear that causes your heart to beat fast and your body to tense up. This week I joined a few of my kids and a group of triathletes at the Giordana Velodrome in Rock Hill, South Carolina, who were taking part in a certification class.  Sometimes I am amazed at what a mom will do for her kids (more about that later).

The course began in a classroom at 9 am going over the rules of cycling at the Velodrome. Watching the screen as Kyle (our instructor) showed what can happen when cyclists don’t follow rules, I began to sweat. Naively, I had seen people (even kids) riding on the banked track at the Velodrome and assumed that it must not be as difficult as it looked. They made it look easy, in fact. Yet, as I looked at the screens and saw some of the accidents that can happen when people aren’t careful on the track, I started to wonder what the heck I was doing there.

Some of our kids have been training with a triathlon group (Volo Multisport) and the group was looking to become certified at the Velodrome in order to train there and participate in some of their monthly races. Unfortunately, clinics for groups require a minimum of eight people. Since the tri team didn’t have enough that were of the age to participate, my husband volunteered me. Which is how I found myself at this banked track… about to clip my cycling shoes into pedals, get onto a bike with no hand brakes, and ride around the 250m world-class Giordana Velodrome. And which is why I began to pray. 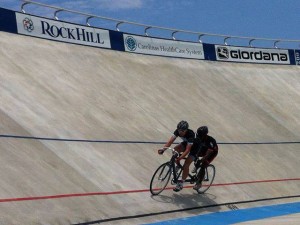 We started out getting used to the bikes. We were clipped in, so that took some getting used to.  Yes, I did say clipped in.  And yes, that does mean your foot cannot come out (ok, yes it can come out if you “unclip” – ha). I told myself I just wouldn’t stop the whole time. Of course we had to stop. So I tried. Still clipped in. Did I mention that the bike doesn’t have breaks?  Minor details….  I probably don’t have to mention that I fell.

We then did some drills on the track, riding just above the “cote d’azur” (the solid blue portion of the track above the “apron” – the flat area before it banks). From there we rode in the “sprinter’s line” (above the solid blue, but not above the thin red line – see picture.) Then it was only up from there. Kyle told us we could venture up to the the thin blue line, through “no man’s land”.  Wait a minute…I hadn’t gotten used to the red yet! The rest of the group seemed excited to venture upward. Really? I was terrified. Literally.

During the classroom portion in the morning, Kyle had explained that as we rounded the corners and rode on the banked sections, we had to maintain at least 13 miles an hour, or we would fall over due to the gravity which would pull us down (that sounded reasonable). However, each time I started around the banked portion of the track I had this sense that it wasn’t fast enough (I know, 13 miles an hour just isn’t that fast). I would panic and then push the pedals and increase my speed. This is when the fear would take over. I would tense up, tightening my hands on the handle bars, concentrating on getting around the turn, the whole time feeling the strangest sensation – like the bike would at any minute begin to fall toward the center of the track and I would go down with it. “Please Lord, just let me get to the straightaway.” When you tense up, though, the steering becomes difficult, causing a wobbling of the bike which of course just made me tense up. “Dear Lord…”

By the time we took a break for lunch, my back muscles and arms were sore from the strain of clutching the handlebars for dear-life. Kyle had noticed the way I tightened my grip and became stiff every time I rode around the banked corners. He told me that if I could relax and lead with my chin, I would be become more comfortable, which would stop the wobbling handlebars… and make for a smoother ride. I tried. But chin out or chin in, there was no talking my way to relaxation.

At lunch everyone talked and laughed. Everyone, except me that is. I was only thinking about the 3 hours we had left on the track…and the words of Kyle that morning – that we would all be riding above the blue by the afternoon. 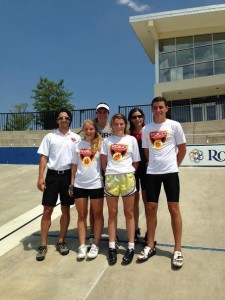 Our group of Volo Multisport riders

When we came back out, the temperature on the track was 105.  But the heat wasn’t my concern.  We went through a few more drills and every time I came off I would go through the same mantra in my mind, “left leg straight, right leg out”.  Because the pedals continue to spin after you click out, you have to be sure your foot hits the ground to truly stop moving.  Since falling that first time when I came off and hit my knees hard on the ground, I was extremely cautious!

My son, Peter (18), also fell once as he was getting off the bike… so I didn’t feel so bad. Speaking of Peter, he was the other reason I found myself praying that day at the Velodrome. Peter graduated this spring and leaves in less than two weeks for West Point. We’ve been told he should stay in a “bubble” till he leaves so as not to arrive on the first day in any way injured. I hadn’t really thought about the Velodrome as a place of potential injury… until I got there that morning. Then with one hour to go I heard Kyle say that the rest of the time would be spent racing. 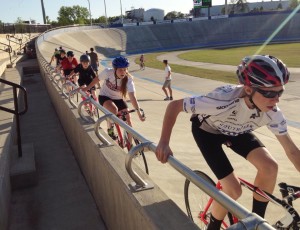 Grace and others at the “rail”

Races on the track always start “at the rail”. The rail runs along the top of the track and each rider rides up to the rail, grabs on, and waits to hear the starter begin the race, at which point they “roll” off the rail and start the race.Kyle had told me I could practice rolling off the rail and then just ride down the track to the apron while the others raced. By this time in the clinic I was just happy to say I had ridden on the thin blue line for two laps. I had passed. I was certified to ride out at the velodrome. I had nothing else to prove. I definitely would not be racing.

With my nerves finally beginning to settle down, I rode on the flat ground in a circle on the interior of the track. I was proud of myself. Although terrified, I had faced my fears. I had ventured out of my comfort zone and tried something totally new.

Just as this thought was going through my mind, I saw Peter fly by out of the corner of my eye. Fear gripped me once again. And once again, I found myself praying. “Please keep him safe. Lord, please let the three o’clock hour come so we can go home!”. Eric, the tri coach, and Joe, another member of the tri team, raced by after Peter. So did a man a little older than me who had joined the clinic during the last hour so that he could finish his racing certification. The man touched out Peter in the first race as they flew through the finish. Eric won the second race. I was still praying. Even my daughters (sixteen and fourteen years-old) were racing. Ah…to be young and unafraid! 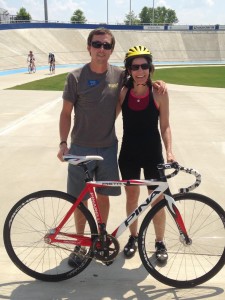 Me and Kyle our instructor

By the end of the day, as we drove through Cook Out’s drive-thru for burgers, I felt exhilarated. It had been stressful (my pounding headache was proof), but I had tackled my fear. I thought about Kyle’s advice – to let go of the tight grip on my handlebars, and try to relax. As soon as I had loosened up on the white-knuckle grip, I felt more in control.

I realized it’s a lot like faith. Sometimes we hold on so tight to our fears that we fail to let God take control. We rely on ourselves and that’s actually a lot scarier. When we loosen our grip and let go of the fear, we can give those fears to God, who can take them on when we can’t. He takes the handlebars and leads us in a direction we can feel confident, is the way to go.

That night I felt like a kid as my head hit the pillow, exhausted. But I knew I was no kid. I was every bit of 47 years old. The fear I had felt that day revealed my years. I guess the older we get, the more we understand how much we have to lose. I will certainly accompany my kids again to a race at the Velodrome. But I will cheer from the stands.