You are here: Home / My Favorite 9 Kid Fitness Posts / Hoka One One: The Newest Running Shoe Bandwagon?

Hoka One One: The Newest Running Shoe Bandwagon?

I first heard the name Hoka One One when my husband showed me an article about the new running shoes.  He asked me how I thought you pronounced it, “Hoka 1..1.., of course”.  Actually, no.  It’s pronounced Hoka One (oh-nay) One (oh-nay).  I read the article, and I couldn’t help thinking about the plight of butter (butter good….no, butter bad…no, butter good).  Or maybe just the fickleness of us humans.

We love a bandwagon.  Especially when it’s backed up by sound research and personal experience.  I am not saying, necessarily that the new Hoka One One shoes are the newest wagon to hop onto. It’s simply an observation.  Just like my observation at the running shoe store that my daughter (#5) works for.  I noticed a few months ago when she first started working and I came in to pick her up, not one “Five Finger” shoe could be found.  Hmmm, interesting.

I’m the first to admit that I jumped on the “five finger” band wagon. After reading “Born to Run” by Christopher McDougall, and being somewhat “minimalist” by nature anyway, I became intrigued by the idea of running with less shoe.  I even wrote an article, briefly stating the pros and cons and asking the question, “Are you a Minimalist?”.

I don’t claim to know scientifically, or anatomically, whether minimalist or more cushion is better.  I’m not even sure if the jury is out yet.  I searched for Five Fingers and still found them selling in places like R.E.I. and certain running specialty stores. Occasionally I still see them out on the trail we run at weekly.  But not in the numbers I used to.  There was a time in the not-so-distant past, that I would see lots of runners donning the shoes (or the “anti-shoes” if you see it that way).

After running in the minimalist Five Fingers for about 7 months, my husband developed a stress fracture.  He doesn’t blame the minimalist shoes, however.  He blames himself.  Although he started out slow, running just a little at a time in the Five Fingers, at some point he just went all in.  As Alan Tyson, (PT and owner of Architech Sports) says, “The idea of running in minimalist shoes, like the Five Fingers, is fine.  As long as you are running on soft surfaces like grass or trails.  However, when we go out and run on asphalt or concrete often…that’s when we develop problems.” My husband still believes in the concept behind minimalist running. But he is not opposed to trying the Hoka’s either. 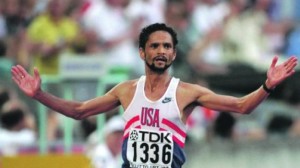 #5 (Annie) tells me she has lots of people asking about Hokas. And I have to admit, I’m intrigued.  As one approaching 50 years old, I am definately feeling my hips and joints a lot more than I used to.  In an article in the Wall Street Journal, Mark Plaatjes (an elite 53 year old runner, a PT, and a former owner of a running specialty store in Boulder) said he is a proponent of Hoka’s. He says, “the difference in my recovery and how my legs felt and how quickly I got over the long runs was just spectacular.”  What runner my age wouldn’t be intrigued?

The Hoka One One website says this about their shoe: