You are here: Home / Family Life / Me and the Energizer Bunny

Me and the Energizer Bunny 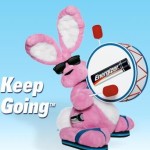 The Energizer Bunny is alive and well…! Actually, I’m not sure where the credit is really due, to the battery… or to our Lifecycle stationary bike.  We’ve owned this Lifecycle since 1992, when my husband bought it for me before #2 (Mary Kate), was born.  It has moved with us from Bloomington, IN to St. Louis, MO, to Indianapolis, IN and finally to Charlotte, NC.  Along the way, the bike has been a loyal friend to me. Especially during my pregnancies and postpartum months (years, to be more accurate).

Last summer, I noticed that the bike’s display panel was dimming and the resistance was slow.  The problem progressed until the bike would not work at all, except to spin. I thought about taking it in, but decided to wait, figuring it would cost a lot to repair.  I wondered how I would take it in anyway; it was large and unwieldy.  Certainly if they had to come get it, the cost to fix it would be even higher. So, I let it sit.

Then, recently we decided to purge our home of excess stuff.  We spent days gathering clothes, books and old gear, trying to de-clutter.  Nine kids, two parents and two dogs can really pack a lot of “things” into a home.  We were on a rampage to rid our house of anything we really didn’t need.  After making one final run around the house for last minute junk to throw in the van, James passed by the bike and looked at me.  “When was the last time you rode this bike, anyway?” It had been a few months but it was probably because the bike was broken and I was putting off doing anything to fix it!  It did take up a lot of space in the closet though… and I could always go to the YMCA when it rained.  And it WAS broken…

We decided to put it in with the rest of the stuff to take to Goodwill.  Our boys were almost out of the garage and in the van with the Lifecycle when they had to put it down because it was so heavy.  When they did, the panel shifted out of place and an Energizer 9-volt battery fell out.  “Stop!” I yelled, “Hold on”.  I ran inside to look for another 9-volt.  We never have anything when we need it, so I was amazed to find a new 9-volt battery in the cabinet.  Another Energizer, in fact!  I ran back outside and quickly put the new one in the panel. I pressed the start button.  “Beep!” The bike worked!  One battery had been in that bike for 18 years… and kept it going!!! Nine pregnancies! All those cold and rainy days…on one little, old battery.

I looked at my husband.  He knew what I was thinking.  No way were we giving that Lifecycle away now.   I told the boys to haul it back up to my closet. Now when I get on the bike on those wet days I have to wonder what the Energizer and my Lifecycle will get me through in the next 18 years. I’ve got a couple spare batteries in the cabinet, just in case!

What is your standby home exercise routine or equipment?