Today my kids and I were inspired.  With our neighbors, we volunteered at the Soldier Ride in Charlotte, NC, early this morning.  As we listened to a few of the men and women speak before the ride, we were amazed and encouraged by their will and determination.

The Soldier Ride is a Wounded Warrior Project initiative that provides adaptive cycling opportunities across the country to wounded service men and women to help restore their emotional and physical well-being.  One of the soldiers at the ride this morning spoke about how he was wounded when his vehicle was hit by a roadside bomb in Iraq.  He lost both his legs below the knee.  He told us that he woke up in a hospital bed and thought his life was over.  He felt like he would never be able to participate fully in life again.  After only a few days in the hospital some of the soldiers from the Wounded Warrior Project came to his room and talked to him… and they inspired him.  It wouldn’t happen over night, but with determination and support from his family, friends, and those at WWP he started living again. And here he was, riding in the Soldier Ride only about 5 years later. 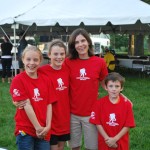