You are here: Home / My Favorite 9 Kid Fitness Posts / Where Do you Fall on the Running Fashion Spectrum?

Where Do you Fall on the Running Fashion Spectrum?

Athleta is one of the popular brands for fashionable, comfortable running clothes.

The other day I pulled up to meet my friend Susan for an early morning run at the trail not far from where we live. Typical of me, I had grabbed the clothes I was wearing quickly…in the dark so as not to wake my sleeping husband. The result of my hasty dressing was a new lululemon running tank and an old pair of gym shorts. I know…when was the last time you heard the term gym shorts? You may have to reach pretty far back into your memory…think 1980’s high school P.E. class for that one. Anyway, by the time I swung into a parking spot, slipped on my running shoes and was tying up the laces, Susan was walking up to my car to say good morning. She greeted me out my drivers side window. “Nice shirt,” she said. I thanked her as I got out of my car and turned to lock the door. That’s when I heard her say, “Oh, sister…really?” I knew immediately she had seen the shorts. Although it was still dark out, her keen fashion eyes had caught the faux pas. “Have I taught you nothing?” She asked. 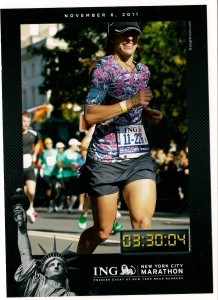 In the running fashion universe, there is a spectrum. On one end there is the “utilitarian” who dresses only for the purpose of the immediate run….fashion really has nothing to do with it. This person,depending on how much she runs, might still have running gear that is fashionable but only because it is what is comfortable and available. On the other end is the “fashionista” runner.  This runner not only has the latest running styles in clothing, but also sports the accessories. She wears cute running skirts and is all about the stylish headbands and sometimes even the flashy socks. Runner’s World did a June 2012 article on the new world of sassy fashion in running.

Honestly, I have respect for both ends of the running fashion spectrum. The utilitarian runner who barely thinks about what she’s wearing except that it is weather appropriate (and comfortable maybe), and the runner whose fashion sense just wouldn’t allow her to dress for purpose alone, both love to run. Likely they have the same end in mind; for one of them the clothes are an after-thought, for the other one the wardrobe is as much a part of the running experience as the shoes are. And in today’s world there are a ton of shopping options out there for runners…Title Nine and Athletica are two (and there are many more).

I admit to historically falling towards the utilitarian end of the spectrum, but as I have gotten older I find myself making a run towards the middle and even at times towards the fashionista end. As a result I have a fairly inconsistent look – hence my lululemon shirt and gym short combo.   As I mentioned earlier, I would put my friend Susan towards the other end of the spectrum. In fact she is a mentor in world of stylish running because she is not only a “sassy” dresser, she is a smart shopper too. She shops online at places like Athleta and lululemon, always looking for sale items and overstock products as well. As for the many other runners I know, they fall all over the spectrum. 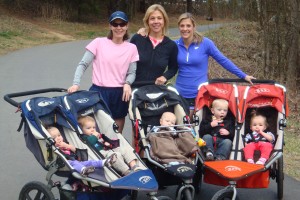 My friends Susan, Karrie. and me about a year ago on a trail nearby… running buddies, babies, joggers and all.

The two other running buddies who I run with often (my twin sister Susan and my long time running partner Karrie) probably would admit to needing some of Susan’s fashion advice as much as I do.  I guess it is no surprise that my identical twin falls at about the same place as I do in the spectrum (except for the fact that she was a “tech rep” for Nike before she had kids and still has some of the clothes to show for it). My longtime running partner Karrie falls even closer to the utilitarian end than I do. This is curious because not only is she a personal trainer, when she isn’t running she always looks very well put together. However, running clothes are not on her priority list. In fact in the colder months you can usually find her wearing an old, grey college fraternity sweatshirt (FIGI) inside-out…something she has run in at least as long as I have known her (about 14 years).

The following conversation sums up the two ends of the spectrum pretty well. A few years ago we gave Karrie a nice running jacket for her birthday. After a few months we asked her why we never saw her wearing it on our runs. Surprised at the question, Karrie looked at us and said, “Oh, that jacket is WAY too cute to run in!” Our friend Susan seemed quite perplexed by this.  But after thinking about it for a second, I said, “You know…she has a point.”

How about you? Where do you fall on the running fashion spectrum?