You are here: Home / Getting Started / What Would You do if You had the Chance at an “About-Face” Change?

What Would You do if You had the Chance at an “About-Face” Change? 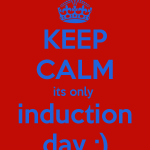 We dropped off our son Thomas (#3) at the United States Naval Academy for Induction Day (I-Day) last Thursday.  I have walked on the grounds of the Naval Academy many times and I have had the privilege of seeing West Point as well.  Whenever I am there I always have some vague sense of envy as I see these young people around the “yard” .  It is a subtle kind of longing that until recently I hadn’t really paid attention to.  However, this time, I really noticed it as I watched my son walk away with the very small duffle bag over his shoulder (filled only with a few white boxer shorts, white tube socks, and some toiletries).  It hit me later in the evening after we spent the day walking around the yard, going into the shops in Annapolis, watching the boats go by.

While we were enjoying the day wandering around, Thomas and all of the “plebes” (as the freshman are called at the Naval Academy) were experiencing their first taste of life at a military academy (and with the lowest rank to boot).  When we saw Thomas again at around 6 pm, after he was sworn in and the smoke of the “fly-over” planes had faded into the blue sky, he was a different person.  Hair cut military short, navy “dixie cup” on his head, and his new white uniform on, Thomas was hardly recognizable. 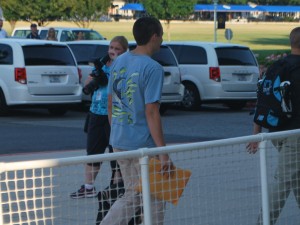 Thomas heading in to report at 7 am…

That was when it hit me.  I finally understood the slight envy I have often felt watching  the young men and women around the grounds of the academies.  The about-face change that happens (even in a few short hours) is, if nothing else,  intriguing.  Most of us change slowly, over time… if at all.  Habits that we might try to break, goals that we might decide to meet, or new standards we may set for ourselves…all of these things are often elusive.  We want to change…it is just hard to effect on our own.  At about the same time every summer at USNA (and at the other academies – West Point, Air Force, Coast Guard, Merchant Marine – and ROTC programs and Marine Corps boot camps too), an amazing change happens. First year college students enter the academy in the morning…and by the time evening arrives, they have shed something of their old life and a new thing has taken its place.

Although it is only a fraction of the evolution that will come in the years ahead for these young men and women, the change is surprisingly vivid, ….and it is this abrupt  kind of change that I envy.  Don’t get me wrong…it’s not that I want to be anybody different.  I just know how hard that kind of change is to come by.  I can’t help but wonder if we all don’t long for the opportunity to shed something of ourselves and to don something entirely new.  Change can be a heart-wrenching process, but it is oftentimes a good thing. To watch these fresh-faced young people get a chance at that kind of life-altering change is exciting…and I can’t help but covet that opportunity. 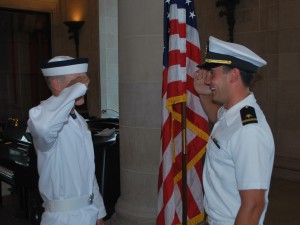 At the end of the first day at the Naval Academy…Thomas salutes his brother Charlie.

So it has made me think. What would I do if I had the chance at an about-face kind of change?  What kind of changes would I make?  As I write them down, I realize the list is not a short one.  I would become more organized, for one thing.  I would throw out my old habit of eating too much sugar and I would become a more proactive person about stretching.  I would become a mom who didn’t take things that my teens did or said personally.  I would stop drinking diet soda and coffee (okay just diet soda).  I would read more spiritual books, pray more,  and send prompt thank-you notes. I would get 8 hours of sleep.  I would eat more fish and less chocolate (well more fish, at least). I would keep a journal and actually write in it everyday.  I would make regular doctor’s visits.  I would organize pictures of each of my children in photo albums and update them regularly. I would smile more often. 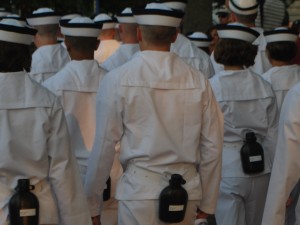 Heading back into Bancroft Hall at USNA…talk about an “about-face”!

How about you?  If you had your own personal drill sargaent, what would be the changes you would make?  Doesn’t thinking about them get your adrenaline flowing…or is it just me?!