You are here: Home / Archives for high intensity interval training

Tabata Method is a Great Way to Workout 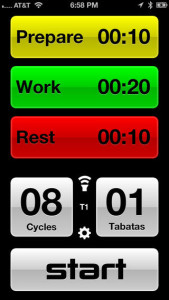 I feel a little late in coming to the dance.  Folks have been talking about high intensity interval workouts for a long time.  Yet, it’s only been recently that I have used the Tabata method.  And I love it.  For those who might also be a little late to the dance, the Tabata method was named for Dr. Izumu Tabata, a Japanese doctor and coach who discovered that short, high intensity exercise followed by shorter rest intervals showed the best performance in studies he conducted (the idea was originally pioneered by the head coach for the Japanese Olympic speed skating team, Irisawa Koichi and Tabata piggybacked on his research and knowledge).

The Tabata method paper was published in 1996 in the journal “Medicine and Science in Sports and Exercise.” entitled, “Effects of Moderate-Intensity Endurance and High-Intensity Intermittent Training on Anaerobic Capacity and VO2max.”  These doctors discovered that interval training produces much better results than aerobic training. This included building as much muscular endurance as 45 minutes of normal cardio training. END_OF_DOCUMENT_TOKEN_TO_BE_REPLACED