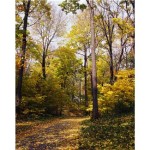 A sublime run on the trail… Today I chose to “plug in”, and it was worth it!

I have been suffering from a lack of motivation lately, so this morning I wasn’t expecting much.  #4 (Peter) was meeting a friend for a long run (11 miles) on the trail so I decided to come along and run on my own. It’s been a while since I have run long alone (I went 10), so I took my phone and some headphones to keep me company.  I ran the first three with #6 (Grace) who was only running six, and then said goodbye, turned on the iphone music, and kept going.

My three miles with Grace had warmed me up and  so I picked up the pace just a little, choosing Pandora radio and settling in.  About 55 degrees, it is finally starting to feel like fall and the air was crisp and perfect for a run.  Right about the time I turned around at the end of mile five, I picked up the pace again…running about 8:05 minute pace and feeling surprisingly good.  That’s when I knew it was going to be a great run. I am sort of new to Pandora, but my kids aren’t, and so through them I’ve been introduced to bands like the Lumineers, Matt Costa, Monsters and Men, and Mumford & Sons, and I love that mellow, almost folksy music.  It kept me moving through mile 8, and I knew when I was still moving at about 8:15 min. per mile that I could maintain that pace till I finished. Sometimes music just works.  When I don’t feel like thinking too much – when I am more in a listening mood- it pushes me- I feel like it is less work sometimes than when all I have to listen to is the sound of my feet.

Today I was grateful for my Iphone and for Pandora, and I finished the 10 miles feeling much better than when I began!  Do you ever have those runs?… I have asked the question before…do you plug in or not? What is your favorite kind of music to listen to while you run?