You are here: Home / Family Life / True Fans Run in the Family…Keep Pounding 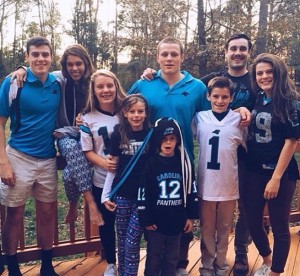 When the Carolina Panthers went to Super Bowl XXXVIII, #4 (Peter) celebrated with a Super Bowl party at our house. The end of an exciting Panther’s season just happened to coincide with his birthday on Super Bowl Sunday. He was turning 8. It was a great party with games and cake and kids gathered around the TV to watch the game. Unfortunately it ended with Peter in tears over the Panther’s loss to the New England Patriots.

Peter turned 20 this week and today the Carolina Panthers will play in Super Bowl 50. A lot has happened in the years in between. One thing hasn’t changed. Peter has never waivered in his love of the Carolina Panthers.  Neither have any of his four brothers (although #9 wasn’t even born in 2003, he’s been a Panther’s fan as long as he’s been able) or his four sisters, for that matter.

We moved to North Carolina from the midwest 18 years ago.  #5 (Annie), #6(Grace), #7 (John), #8(C.C.), and #9(Sam) were all born here.  Although my husband James and I grew up in Chicago Bears country, we couldn’t help but quickly become Carolina Panthers fans as we watched our boys form an attachment to the team (2016 Carolina Panthers and their energy and enthusiasm remind me of the 1985 Chicago Bears team).

Our home is evidence of the fact that our kids have always been Carolina fans. We have old jerseys with names like Delhomme, Davis, Peppers, and Muhammaad.  We have a football signed by Steve Smith, jerseys with Mike Tolbert and Thomas Davis autographs, and a picture of #5 (Annie) with Greg Olson. Each of the boys have their lucky game day gear (one refuses to wash his) and no matter where they are, Charlie (#1), Thomas (#3), Peter (#4), and John (#7) always face-time to touch base during the game.  With one in Virginia Beach, Virginia, one in Annapolis, Maryland, one in Highland Falls, New York, and with the rest of the nine still here in Charlotte, it’s great for this mom to see how they share their love of their favorite team…regardless of the miles that lie between them.

Even in the years from 2008 to 2013 when the Panthers failed to make a playoff, our kids were serious fans.  They never gave up on their team. In good times or in bad.

All of our children have participated in sports. Some even at the college level. When it is all on the line, there is something pure about an athletic pursuit.  Like the Panthers, my kids have had their ups and downs. What athlete hasn’t?

Ken Reed, author of How We Can Save Sports: A Game Plan has said, “Sport at its best requires athletes to give more than they thought they could — physically, mentally, emotionally and spiritually… A person is rarely more alive — or living in the moment — than during an intense sporting event. There’s no regrets about the past or angst about the future in the heat of competition. ”

Sometimes sport mirrors life.  We work hard. We fall down. We get up.  For my kids (I would venture to guess for many of the fans out there), this day has been a long time coming. Although our family will be watching the Super Bowl in four different cities, we’ll be together in spirit…cheering on the Carolina Panthers with an intensity that has grown over many years.

On behalf of my family I want to say thank you to the Carolina Panthers for all the hard work that has brought them to this day. I want to thank them for the excitement they have brought to our city and for the fun our family has shared because of them. Finally I want to thank the Panthers for inspiring me to remember that no matter what happens in Super Bowl 50 or in life…I will continue to encourage my family to Keep Pounding. 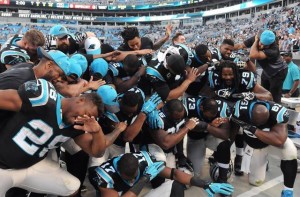