You are here: Home / Archives for Pope Benedct XVI

Filling the Shoes of the Fisherman 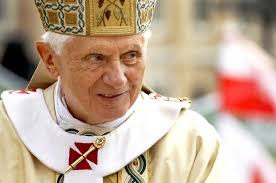 I am moving off the regular topic of fitness today…I guess when it’s my website I can do that!

I remember when Cardinal Ratzinger became pope. I wondered, like many probably did, how he would fill the shoes of Pope John Paul II.

Converting to Catholicism and coming into communion with the Holy Roman Catholic Church in 1991, I came into the Church when John Paul II  had already been the pope for 13 years, and I like to say that he is the pope of my conversion (he would serve as pope for another 14 years after that).  Pope John Paul II became for me a source of strength, and remained a light for my faith in the years to come as I was learning more about Catholicism, raising my children, and developing an understanding of what it all meant for my own life as a wife and as a mother.  I related to John Paul II in an oddly personal way. This is something I have heard others say as well. I certainly did not know him, yet he touched us with his charisma, his love of sport, fitness, and the outdoors, and his tremendous optimism.  “Be not afraid”  was his motto, which resonated with youth from all over the world. END_OF_DOCUMENT_TOKEN_TO_BE_REPLACED