You are here: Home / Archives for marathon running 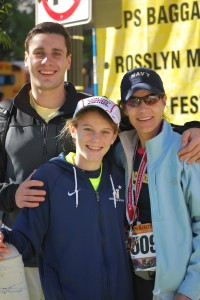 Whitney with son Charlie and daughter Annie after MCM marathon

The marathon demands respect and every time I run one, I respect it more.  Sunday’s Marine Corps Marathon in Washington, DC gave me a new respect, not only for the 26.2 miles of running, but also for the elements like weather which are totally out of our control.  Waking up Saturday to 32 degrees and rain (which would turn to sleet and then a little snow by the end of the day) was a real psychological test for me and probably most of the runners, who lined up with umbrellas outside of the National Guard Armory to pick up race numbers and packets.  I could see it on the faces of other runners and could hear it in the conversations around me.  “If this keeps up till tomorrow morning…you can count me out of the race”. I heard these rumblings all around me.  Most of us were just glad it wasn’t Sunday, but we all knew it wasn’t going to warm up much in 24 hours. END_OF_DOCUMENT_TOKEN_TO_BE_REPLACED