You are here: Home / Family Life / Quote of the Week: Always Upward!

Quote of the Week: Always Upward! 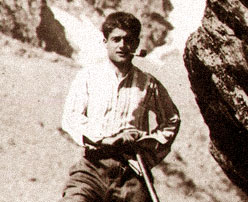 I have always been fascinated by Pope John Paul II. What many people don’t know about this incredible man of God, is that he was a fine athlete and outdoorsman as well. Even during the early years of his papacy, John Paul II was hiking, swimming, and running. He was criticized, in fact, for jogging in the Vatican Gardens, since tourists could see him from the top of the dome of St. Peters. When he was questioned about the cost of installing a pool so he could swim laps in the summer, he said, “It’s cheaper than a new conclave”.

I once found a short excerpt from one of Pope John Paul II’s writings entitled, Why do Men Climb Mountains? Unfortunately, I have never been able to locate it since. But in my search for this writing, I discovered one of his favorite heroes, Blessed Pier Giorgio Frassati. This young man died in his youth, but in his short life he accomplished much. One of the things that I found interesting was his quest to discover God in nature and physical endeavors. An avid skier, mountain climber, and overall outdoorsman, Frassati seemed unafraid to push his physical limits, and in doing so, found a way to glorify God. He also served the poor tirelessly in his short life, uniting himself to the suffering of those less fortunate. 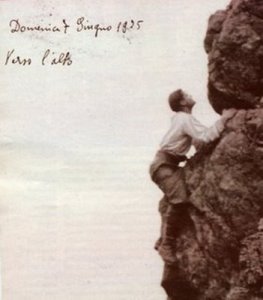 The words “Verso l’Alto” are commonly found on information about Pier Giorgio Frassati. In fact the words were scribbled on a photograph taken of Pier Giorgio on June 7, 1925. In the picture he was climbing a mountain and looking skyward. It was taken just one month before he died suddenly of an illness. The words translated mean, “toward the top” or “always upward”, and after his death they took on more meaning for others who remembered him “striving to reach the summit of eternal life.”

Pier Giorgio Frassati made the connection between the body, the mind, and the spirit, and offered all of them to the glory of God.
I think his motto is worth considering. Whether it’s a long run in preparation for a marathon, or just training for the marathon that is life, I hope that I can remember the words of this courageous young man and seek to be climbing (or running) “Verso l’Alto!

Join in the worldwide birthday celebration of Pier Giorgio Frassati!