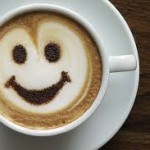 Most people who know me know I like coffee (ok I’ll admit it…I love it). I can usually be seen with a cup of coffee in my hand most of the morning in fact.  I like it hot so I usually have to either microwave it or pour it back into the pot and refill my cup to keep it piping.  I’m always happy to find reasons to keep drinking my Joe and so when I recently read an article touting the benefits of coffee, I was confidently re-affirmed that my coffee-drinking habit is justified (I admit I conveniently avoid reading articles suggesting otherwise).

The following are nine reasons I am a happy coffee drinker:

1. It tastes good.  And smells even better.  For me, one of the happiest moments every day is when I smell the warm, inviting aroma of coffee.  Whether it’s the first whiff of a bag of the grinds, the aroma of the coffee maker percolating, or the deep coffee scent walking into “coffee house”,  just the smell of it brings me sweet contentment.

Although he always liked the smell, coffee never really appealed to my husband before a trip we took to Italy about five years ago.  It was a rainy afternoon in Rome and we went into a tiny cafe to get dry.  We sat down and I ordered a cup of coffee.  European coffee is not presented like ours is.  It came in a tiny little cup and it was Espresso.  I took one sip and couldn’t handle the bitter flavor.  James smelled it and decided to sip it.  He liked it!  That was the start of the coffee habit for my husband, and it only stood to re-affirmed my own.

2. It’s stimulating effect.  Maybe because I don’t drink or use any kind of substance (I rarely take pain medication even) I am especially drawn to the stimulating effect of coffee. I admit it is probably a combination of a sort of vice and a necessity.   I am forever seeking more sleep (although I am also working on getting more of it), so whatever stimulating effect coffee has, I am only happy to oblige it.  And yes, if I don’t drink it I get a headache.

3. It’s known to boost exercise performance.  Dr. Mercola recently wrote, “According to Health Magazine, Japanese researchers recently discovered that people who were not regular coffee drinkers experienced a 30 percent boost in capillary blood flow after drinking five ounces of regular coffee, compared to those drinking decaf. Improved blood circulation typically equates to improved oxygenation of your tissues, which may boost your exercise performance. 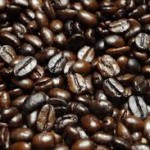 4. It also increases endurance. Most serious athletes who do longer distance events or multi-sport events such as the triathlon, appreciate the effect of caffeine.  This is because caffeine can reduce your “perceived level of exertion by 5%” making it appear easier.

5.  It can reduce pain of a workout (even just a little).  Dr. Mercola states, “The featured article notes research from the University of Illinois, which found that a caffeine dose equivalent to two or three cups of coffee taken one hour prior to a half-hour-long workout reduced the participants’ level of perceived muscle pain. This pain reduction could allow you to push yourself just a bit harder, which is important during high intensity exercises.”  I’ll take it.

6. It Can improve memory.

7. It may be good for the heart.  Researchers at Beth Israel Deaconess Medical Center (BIDMC) and Harvard School of Public Health, concluded that drinking coffee in moderation protects against heart failure. They defined ‘in moderation’ as 2 European cups (equivalent to two 8-ounce American servings) per day. People who drank four European cups on a daily basis had an 11% lower risk of heart failure, compared to those who did not.  The authors stressed that their results “did show a possible benefit, but like with so many other things we consume, it really depends on how much coffee you drink.”

8. It can help keep you regular.  A long time ago I was talking to a good friend and running buddy who also happened to be a doctor.  We were heading to grab a cup of coffee after a long run and I was telling him how much I liked coffee and wondered out loud if it might actually be bad for me. Like the good doctor that he is, he told me that coffee was actually good for me in modest amounts. Then he started talking about the “stimulus” effect.  Naturally I thought he was talking about the “stimulant” effect until he told me he was actually talking about caffeine’s potential effect on the bowels. For a more detailed look into the “stimulus” effect of coffee click here: (Coffee and the Ritual Bowel Movement).

9. Coffee makes me happy (I guess it doesn’t take much): There is research to back this up. In a Harvard study published in 2011, women who drank 4 or more cups per day had a 20% lower risk of becoming depressed. Caffeine works by stimulating the central nervous system but may act as a mild antidepressant by increasing production of certain ‘feel good’ neurotransmitters in the brain, including serotonin, dopamine, and noradrenaline.  This could explain why previous epidemiological studies have found a lower risk of depression among coffee drinkers in past, the researchers reported.

I don’t need research however, I’m satisfied.  Like I said, I just love coffee.

Do you drink coffee?

Filed Under: Nutrition, Running, Strength Tagged With: coffee, java, why coffee is good for you