You are here: Home / Running / My Fitness Evolution 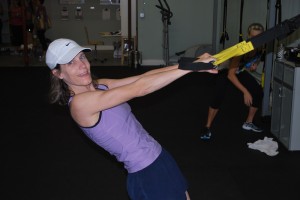 When I first began exercising regularly (not counting my high school track days or even my college days with my walk-man plugged into my ears), the concept of rest, weight training, or core workouts were foreign. Now, about 20 years later, things have changed and I realize that the way I look at fitness has evolved. The biggest changes I have made are to rest more, to cross-train, to change things up, and to improve my nutrition.

My first evolution…rest
There was no intellectual realization or new discovery here, except that with each baby we had, rest became a more respected commodity for me. Most new parents just learn this. We may think we can do it all, and that we will fit in that early morning workout while the newborn is sleeping, but the facts usually hit us hard and fast after a new baby arrives, and we simply know that rest is more important. When our last baby (#9…Sam)  was born (he is now 2 1/2), I had evolved to the point that if I had to choose between sleep and a workout, sleep almost always won out. I have come to treasure my rest because not only does it make me feel better, there is scientific evidence that it makes me a better athlete as well (this is the case for all kinds of athletes…from the weekend warrior to the professional).  So as I turn 45 (this month), there is no doubt that rest has become one of the most important parts of my fitness regimen and it will continue to be for a long time to come.

The next evolution…cross training
It’s hard to imagine now, but looking back at how I used to do things, running was really all I knew. Besides occasionally hitting the weight machines or the elliptical if I couldn’t get outside, running was a daily affair. As I mentioned already, rest days were rare, and so were cross training days. When we moved to Charlotte, North Carolina about 13 years ago, I kept up with the running and met a new running partner who happened to also live next door! Her name was Karrie and we quickly became great friends, logging in miles along with many conversations about our kids, our upcoming marathons, and our lives in general. However the constant running was taking its toll on both of us. I was already feeling the aches and pain of a recurring IT Band injury and Karrie developed a bone spur in her foot. With both of us sidelined from running…I started swimming and together we went to our first cycle class. Little did we know as we were spinning in the back of that crowded class at the Y, that it would launch Karrie into a whole new world as a cycling instructor and personal trainer! We were both hooked. The once-a-week 5:45 am cycle class became a staple of mine, and it helped a lot when Karrie started to actually teach the class. What I discovered about cycling was how quickly my heart rate would rise, something that unless I did intervals or a tempo run, rarely happened to the same extent on my regular runs. The other positive thing about the spin class was that it got me off the roads! Sadly to say, I haven’t been to a cycle class in a long time, but it did propel me to view other forms of exercise as valid and even better in many ways than running.

At about the same time that I discovered spin classes, I also started to train with Masters Swimming at the pool where my children swim. There was a morning practice (5 am) that my kids had to be at every Tuesday and Thursday, and coincidently the masters group also worked out at this time (just a little later -5:30). Since I was taking the kids to their practice, I figured why not stay and swim too! I found swimming to be an incredible full-body workout, and I had a ton of fun with the other swimmers (sometimes as many as 60 people would be swimming masters and the coach Patty Waldren is known all around Charlotte as an awesome masters coach). To this day, I feel the best after a swim workout than any other kind of exercise – I feel it in my arms, my legs, and my abs. I love the kind of  fatigue I feel the whole day after a swim workout (my kids don’t seem to appreciate  it as much as I do). Unfortunately, a weird shoulder pain has kept me out of the water for about two years now, but I am determined to get back in soon. All of this non-running stuff made me realize that there are a lot of roads to fitness, and in fact running was the probably the hardest on my body. While I still love to run, the reality is that I will probably do less of it as I age, and luckily I now realize this will not take anything away from my fitness level.

The next evolution…Mixing things up
Although this evolution is  along the same lines as the change I  made from exclusively running to cross training, I believe it has really come to mean something even more, which is why I’m giving it a separate category. A popular notion in the fitness world, “mixing things up” or “muscle confusion” can mean different things. For the purposes of this article, it means keeping the muscles working in a fresh and new way all the time in order to keep my body constantly working and changing. The reason for this is simple: with the repetition of the same type of workout, our bodies will get used to the exercise routine and will consume less energy. But when we change things up, especially when we include some body weight exercises like eight count body-builders, mountain climbers, or push ups, and core fitness like TRX (see picture of me above), we are not allowing our muscles to get “bored” and for things to become routine.

I have to admit that this concept was lost on me when I first began exercising (as I said, really just running)  regularly over 20 years ago. I was stubborn and believed that all I needed was to log miles, get faster, and to do cardio-type workouts if I couldn’t run. I was told that weight lifting was an important addition for an athlete, but frankly I didn’t believe it. My perspective on this has certainly changed since those days! Especially as I get closer to the 50-year mark, I am becoming more and more certain that cardio is just one part of the bigger fitness picture for me. In fact as my body inevitably wants to start sagging here and softening there, I find that the muscle confusion and strength training element of my exercise routine becomes even more important. So changing what I do on a regular basis is extremely important! Whether it is a run one day, a Pure Barre class or Yoga the next, a core workout or P90X the next, when I mix things up, my body has a better chance of staying toned, and things never become routine. I am not one who wants to be “buff”, but I know that strength training comes in many forms, not just weights. That is why I love the core fitness workouts that result in a more toned body, not a “buff” one. The final crucial piece for me is to remember that the inner most part of our core, the pelvic floor and surrounding muscles, have to be worked in order for us (women especially) to strengthen the “continence” muscles of our bodies! That way we can continue to work out well in to our “golden years”.

The final evolution…the Rule of 70
I have written about my opinion that our diet is 70% of the weight loss equation and exercise is 30%. Since at this point in my life I am not seeking to lose weight, but to maintain it, I still believe that the most important thing I can do is to eat well. If I think about the changes I have made in regard to this over the years, the biggest one has come from eating a more varied diet. Energy is a main focus for me. With nine children I feel like I am constantly reaching my reserve limit in terms of energy! I used to rely on mostly the same kinds of foods, and not nearly as much on whole foods as I do now. I have to consciously decide every day to make better choices, and it is not easy for me at all.

One of my biggest downfalls, believe it or not, is energy bars. Because they are simple and convenient, for years I have relied on them for breakfast and as snacks, but I have learned they are not the best choice for me as an energyy provider and depending on the kind I am eating, can be really nothing more than an elevated candy bar. I now try, at least a few days a week, to eat steel-cut oatmeal, yogurt and fruit/granola, or an egg for breakfast instead of grabbing an energy bar. I discovered that I seem to have more energy when I choose whole foods rather than processed ones. These types of foods are obviously also healthier for my children, and that makes good sense to me. I still grab a Fudge Graham Zone Bar (my favorite) on an occasional morning when I need ease over substance, but I am trying new things all the time. The other nutritional change that I am attempting lately is to cut back on my sugar intake. Anyone who knows me well knows this is not easy! I love my sweets! But talk about an energy-drainer! I literally feel it like a curtain coming down when I have eaten too much sugar and I’m coming down off “the high”. I know that I crave sugar often (at least that is what it feels like), and so finding substitutes is increasingly important. Some of the foods I try to choose over sugary snacks are Trader Joes Gluten-free granola (delicious), Greek style yogurt with berries, and frozen grapes (love these). As a sweet-lover, I’m sure this one will always be a struggle, but I am evolving, for sure!

What has been your biggest evolution in terms of fitness???