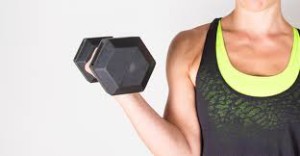 There are lots of myths in the world of fitness.  Sorting through the facts and the fiction is often a challenge.  My good friend and owner of Architech Sports, Alan Tyson (PT, ATC) wrote an article recently, exposing some of the myths behind the notion that “lifting heavy makes you big and bulky”.

Basically, what Alan revealed is that it is often what we eat that creates the bulk, not the weights we are lifting.  He explained that the idea that “toned” physiques come from lifting lighter weights more times, just isn’t supported by science. “Producing bulky muscles requires not just heavy weights, but heavy calorie consumption, typically above the daily calories recommended for most adults.

“For people who lift weights to tone up and slim down, experts say a regimen that includes a combination of challenging weights and fewer repetitions can help significantly,” said Alan.  In a 2002 study, for example, scientists looked at what happened when women performed various resistance exercises at different weights and repetitions (85 percent of their maximum ability for 8 reps, versus 45 percent for 15). Subjects lifting more weight fewer times burned more energy and had a greater metabolic boost after exercise. In another study published last year (2012), scientists followed 122 women for six years. They found that those who were assigned to do resistance exercises three times a week — sets of 8 reps at 70 to 80 percent of their maximal ability — lost the most weight and body fat. A similar two-year study of women who did strength training with challenging weight twice weekly found similar effects on body and “intra-abdominal” fat.

The bottom line? For better tone, try fewer reps and more challenging weights. Challenging means a weight you can can only do 8-10 reps (If you can lift the weight 15 reps then go up in weight) Alan stresses that a daily stretch routine is also important in order to not lose flexibility (after the workout is best but if you are short on time then at least later that evening).