You are here: Home / Family Life / Movie Review: “The Way”….and a Quote of the Week

Movie Review: “The Way”….and a Quote of the Week 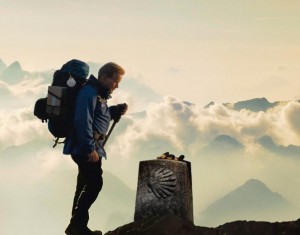 Quote of the week: “You don’t choose a life, Dad…you live one.” From the movie, “The Way” (Emilio Estevez and Martin Sheen)

If you are thinking about seeing a movie this holiday, I highly recommend “The Way” with Martin Sheen. It is actually a collaboration between Martin Sheen and his son Emilio Estevez, to honor the pilgrimage along the Camino de Santiago. The Way of St. James is the pilgrimage route to the Cathedral of Santiago de Compostela in Galicia in northwestern Spain, where tradition has it that the remains of the apostle Saint James are buried. Depending on where a person starts on the Camino, it can take a few months to travel “the Way”.

Not wanting to appeal to one demographic, Estevez, who wrote and directed it, called the film in an interview “pro people, pro life — not anti — anything.” He also called it a celebration of life. Martin Sheen described the film as one that exposes the brokeness of humanity, but also the connectedness we have with each other and with God, even if we don’t recognize it. It’s wonderful to see a film that, while revealing the best and the worst of human nature, embraces spirituality without being forceful.

Not only is the story inspiring, but the scenery is breathtaking and the music (mostly by Tyler Bates) draws us in and invites to walk on the Camino along with the characters.. After first seeing the movie with my husband, I insisted my mother go, and so I went to see it with her, too. Afterwards she said she wanted to buy the soundtrack… so do I! Movies are expensive these days and often not really worth the cost, but The Way” is well worth the ticket price. It is truly a story I didn’t want to end…it’s a movie that stirs up something in the viewer, like a profound piece of poetry or classic literature. It moves us, because we relate to not only the characters, but the land itself  (the burden of the road, maybe). There is a universality to the film that touches the soul…it seems to both pose and answer a question about the way or journey of life…and leaves us thinking about it well after we have left the theater.

“The road” as a metaphor has always been a part of Amercian culture. Even today we hear it in pop songs like the one Rascal Flatts has made popular, “Bless the Broken Road” (… “I set out on a narrow way…”).  Jack Kerouac wrote about a journey on “the road” of the American landscape in the 50’s. Many think of the Keroucian journey as two guys setting out “on the road” for kicks, however Kerouac, a Catholic, said that he was also seeking something spiritual. “What’s your road, man?–holyboy road, madman road, rainbow road, guppy road, any road. It’s an anywhere road for anybody anyhow.” (Jack Kerouac, On the Road, Part 4, Ch. 1)  “The Way” is about a journey that begins in France and ends on the northwest coast of Spain, showing that the metaphorical road is not unique to the American way of life.

This theme – of traveling the road of life (brokenness and all)- is well developed in the film. One of the characters describes the “Camino de Santiago” as a metaphor, and I saw the whole film as a kind of metaphor as well. It represents the journey of life, its hardships and trials, and it’s joys and surprises that together bring us face to face with the question of redemption- and if we will seek it or not. In one scene, an Irish writer (Jack) who is dealing with writers block, discovers that Tom (Martin Sheen) has recently dealt with tragedy. This news immediately excites Jack because he now has something to sink his teeth into…to really write about. It’s the tragedies and sufferings of this life that shape us and form us into who we are; at the same time uniting us to others, who are also on the “road” of life. Jack recognizes the “universality” of this suffering and seems to know that others will also connect with it. “Its brilliant”, he says, “I mean tragic…but brilliant”! I don’t want to spoil it for anyone, so I won’t divulge the tragedy, but I will say that it is what connects us to Tom because we all face tragedies in life at some point.

One aspect of the film may be objectionable to some (Catholics in particular), and that has to do with the scattering of remains (ashes). The Catholic church, which began allowing cremations only in 1963, prefers that funeral rites be conducted before the body is cremated. It also prefers, according to guidelines prepared by the National Conference of Catholic Bishops, that the remains be treated as a body would be: buried in a grave or placed in a tomb where they can be regularly honored. Martin Sheen and Emilio Estevez were interviewed on EWTN and responded to this issue. Estevez, who understands that the treatment of the ashes is contrary to Church teaching, says the main character Tom, is a lapsed Catholic and wouldn’t be knowledgable about such things.  In every other way, the film presents a positive portrayal of the Church and of Christianity in general.

If you are looking for a powerful, moving, yet funny film to see over the holidays…go see “The Way”…and let us know you think!

Filed Under: Family Life, Spirituality Tagged With: the film "The Way"