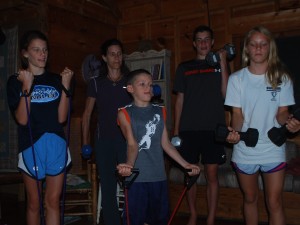 Shoulder and arms workout with #4, #5, #6 and #7. All eyes on the dvd playing in the laptop. I’m breaking my electronics pledge already. It does come in handy, however!

This morning I woke at 6:25 a.m., not to the sound of loons, but to the sound of rain…and it didn’t stop until after 7 p.m.! Somehow we could tell very early that it wasn’t going to let up and so we decided to forget the morning run and do P90X inside the cabin and then head to Freeport (L.L. Bean country) and do a little shopping. Four backpacks, two pairs of shoes, and a few shirts later…still under umbrellas, we finally left Freeport.

We got back to the cabin around 5p.m., and I joined #4 (Peter)and #5 (Annie) for a five mile run in the rain. On the way back they made a bee line for the lake and jumped in. Very cold water awaited them…I passed on that part of the run. Instead I made dinner with #8 (C.C.)…sweet corn, black bean, and cheese quesadillas with whole wheat tortillas and homeade peach cobbler for dessert… Yum! James joined us for another game of Phase 10 (we had to start a totally new game since we had a new person – but it was worth it). It’s now 11:30 p.m. and we are finally calling it a night…after I made everyone do a “whirlwind cleanup”. We are hoping for a dryer day tomorrow!!!

Day three at Lovejoy Pond over and done.