You are here: Home / Family Life / Day One at Lovejoy Pond…Keeping the Main Thing The Maine Thing 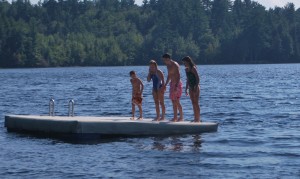 Day One August 14, 2012 Thought of the Day…”Keep the Main thing the Maine thing.” This morning I woke up to the sound of Loons (a woeful, high-pitched, almost song-like cry) at about 6:40 a.m.  Some of the kids got up about 20 minutes later and quietly raced down to the lake where we are staying (there is a quiet hour rule in effect here from 9:00 p.m. to 9:00 a.m.)  We are staying in a cabin that long ago was a part of Camp Menatoma and is now owned by my brother-in-law’s family. It’s a lovely peaceful area right on the water with two docks…one for swimming and one for fishing. About 15 other cabins dot the area where we are located and everyone shares the docks, a few lodges, and a laundry outhouse.

After scoping the calm lake water and throwing in a fishing line or two, the kids returned to the cabin hungry. We all ate a quick breakfast and got into the car to travel about 25 miles to Colby College for a track workout. Two of our kids are high school cross country runners and so they did a tempo run on the track while I took the younger ones in the baby jogger around Colby’s campus. We did our shopping on the way home from the run, hitting the Super Wal-mart, a fishing tackle store, and The Apple Shed where they sell fresh farm stand produce and awesome apple turnovers (which of course we had to buy).

By the time we returned with our groceries, it was already 1 p.m. and we were more than ready to jump into the lake. Five hours later, they were still out there…they had boarded canoes and were trying their luck with the fish in the lake. I had not made it that long and was up at the cabin getting acquainted with it’s old, damp smell, trying to figure out how to work the Wincroft gas stove. Feeling very “Little House on the Prairie”ish, I sliced some farm fresh cucumbers, watermelon, and potatoes for dinner. Then I found an old set of wooden blocks for Sam to play with, and I went out to the little porch swing and sat.

It is really amazing how very few times I can remember in the recent past (say 4 or 5 years actually) when I have just sat… not planned, thought about what I needed to do next, come up with a to-do list, called someone, caught up with emails, or worried about this or that (or him or her). Amazing…and a little sad in fact. That’s when I came up with the thought of the day. I would like the main thing this trip to be about the moment…about not worrying about tomorrow or things that lie ahead…just focusing on today and our time here in Maine. Keep the main thing the Maine thing!

Everyone slowly began to make their way up to the cabin and we sat down for dinner (sauteed potatoes, cucumber salad, watermelon and hamburgers). After cleaning up the dinner dishes, waiting for turns in the shower (I have discovered that one bathroom for eight people is a good exercise in patience), and getting the little ones to bed, James got to work typing a memo and the rest of us gathered around the table to play Phase 10. At 11:02, with Grace and Annie tied for the lead, we gave up and fell into our beds.

Day One at Lovejoy Pond over and done.